“We chose RadioMobile based on the strength of their technology and their ability to understand the Department’s very specific needs.” 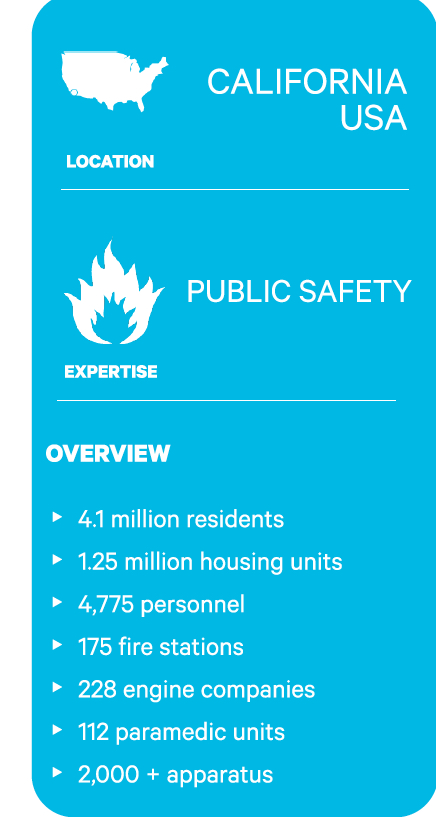 The County of Los Angeles Fire Department’s service area spans an eclectic mix of urban, suburban, beaches, open water, and mountainous terrain making wireless connectivity an ongoing challenge to safe and effective operations and rescue. According to Scott England, LA County’s Telecom Consulting Engineer, “The Department needed a data communication solution that would allow personnel to share critical information regarding the current situation and their status regardless of the availability of an LTE network. What they needed was a secure wireless data communication network that could be relied on to survive natural and manmade events while ensuring ubiquitous connectivity and data sharing across their entire service area.”

Specifically, the Department needed to utilize their LMR spectrum not only for voice but for digital data and messaging which would connect the Emergency Communications Center (ECC) with every vehicle mobile data computer (MDC) in order to send incident dispatches, receive status updates, provide digital messaging, and share location information among all responders. In addition, the Department wanted to have more control over costs and network security than could be achieved by relying solely on commercial broadband.

The proposed solution would ensure coverage well beyond commercial broadband by automatically switching between LMR and LTE depending on network availability and speed. In addition, the network would be closed to outside threats placing security under greater control. Finally, because the Department was no longer dependent solely on commercial broadband, the network would have an overall lower cost-of-ownership.

“We chose RadioMobile based on the strength of their technology and their ability to understand the Department’s very specific needs,” according to England. “Also, we had heard about the remarkable things they had done for Los Angeles (city) Fire Department and CAL FIRE, so we knew they could deliver on their promises.”

The solution includes the installation of 12 LMR sites strategically placed throughout the County. Utilizing narrowband UHF channels operating at 22 kbps over-the-air, these “high sites” extend the radio signal far beyond that of low-level infrastructure offering greater range with fewer sites. In addition, the sites were hardened, well-protected and within the secure confines of the Department’s facilities, adding another layer of security.

Each site was equipped with a Tait TB8100 base station radio and RadioMobile 2212 Base Station Controller (BSC) that links the site to the computer aided dispatch (CAD)/AVL network via the IP backhaul. The TB8100 was selected for its selectivity, sensitivity, and adjacent channel interference specifications, ideal for use in high-noise environments like Los Angeles County.

Mobile units and apparatus are equipped with a mobile data computer connected to the network via a Tait TM8100 Mobile Radio that includes an integrated RadioMobile IQModem. The IQ Modem converts data from a digital format into a format suitable for analog transmission. In addition, the Department’s 220 fire stations are each equipped with RadioMobile’s IQ Fire Station Alerting System (IQ FSAS) that utilizes the mobile data network as its primary resource for communicating alerts and information to and from the stations. Again, an integrated TM8100/IQModem device receives the data call and passes it to the station hardware for immediate alerting.

Finally, the RadioMobile​ IQ Mobile Server intelligently switches between available networks to ensure that data is transmitted between communication end points as quickly and cost-effectively as possible.

As a result of the deployment of its LMR-based mobile data network, the County of Los Angeles Fire Department stands better prepared to protect the lives and property of its residents and visitors than ever before. The network provides a layer of redundancy when commercial broadband is unavailable or compromised as is often the case in natural disasters. And because the network supports data communications, the Department can share vital details such as map locations, pre-plans, dispatch details, and more. Plus, the Department now has greater control over the cost and security of its emergency communications and infrastructure.

Future plans call for the integration of the Department’s network into the Los Angeles Regional Interoperable Communications System (LA-RICS). LA-RICS will utilize 22 towers and LMR technology like that deployed for the County of Los Angeles Fire Department to create a unified web of communication, eliminate barriers to multi-jurisdictional responses and allow police, firefighters, and paramedics to communicate directly with users outside of their agency.

“The mobile data network helps us deliver on our mission to protect lives, the environment, and property of those we serve by keeping everyone informed and connected,” says England.  “We look forward to the time when the entire region can share live-saving data and information as easily.”