“RadioMobile was so willing to find a total solution, and they allowed us to do a proof of concept with them before ever purchasing anything, which was great.“

Leading the Way in Connectivity and Location Accuracy for First Responders

The California Department of Forestry & Fire Protection is not your typical fire department. Better known as CAL FIRE, the agency provides fire protection services across more than 31 million acres of privately-owned wildlands in the nation’s most populous state. In addition to those responsibilities, CAL FIRE’s thousands of firefighters provide all-hazard emergency services—responding to medical emergencies, auto accidents, hazmat incidents and more—in 36 of the state’s 58 counties. The 812 fire stations operated by CAL FIRE are organized in 21 administrative units that each have their own computer-aided dispatch (CAD) system and connectivity challenges. One area might have great 4G coverage, while another is so remote that cellular communication is impossible. To overcome those obstacles, CAL FIRE set out to increase operational efficiency, safety, and connectivity in two ways:

1. Create seamless communications connectivity for their entire fleet of fire apparatus.
2. Equip all frontline vehicles with automatic vehicle location (AVL) technology that functions in all 31 million acres of service area.

To some, those goals may have seemed like searching for a unicorn. But with careful planning, a clear strategy and customized technology, CAL FIRE is solving both needs.

CAL FIRE researched countless technology options, but kept running into walls, including inflexible contract rules and an overall inability to provide a total solution for their connectivity and location accuracy needs. 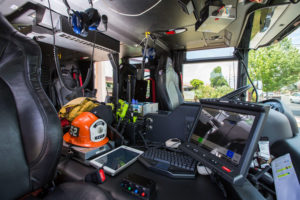 “RadioMobile was so willing to find a total solution, and they allowed us to do a proof of concept with them before ever purchasing anything, which was great,“ says Dan Marksbury, CAL FIRE’s Chief Technology Officer. This was an important step in allowing CAL FIRE to realize its goal of increased dispatch, response efficiency and on-scene accountability.

After additional research, CAL FIRE decided to install the Patriot All-In-One mobile data computer in over 1,100 of their frontline vehicles.

By using the Patriot MDC along with technology that provides connectivity over LTE/4G, satellite, and CAL FIRE’s private land mobile radio (LMR)-based mobile data system (using narrowband frequencies), each vehicle was integrated into the AVL system. 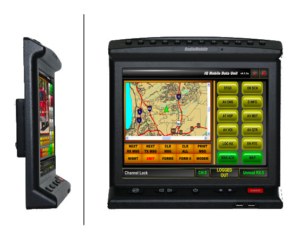 As a CAL FIRE vehicle drives through an area, the system automatically finds a connection with 4G; when 4G is not available, the application (IQ Mobile) running on the mobile data computer (MDC) intelligently connects through the narrowband system or via satellite as a last option to always maintain data connectivity to the dispatch center.

The application can also run on tablets and other devices.) The communications center can now see exactly where responding vehicles are instead of guessing where they might be within their assigned service area, allowing dispatchers to send the closest available unit every time.

Beyond knowing exactly where a vehicle is at the time of dispatch, the ability to track a vehicle as they respond through urban, suburban and rural environments on the vehicle location system, is invaluable, according to CAL FIRE. A dispatcher or incident commander on a large-scale incident can provide turn-by-turn directions in remote or unfamiliar areas if needed, increasing the efficiency of any response. 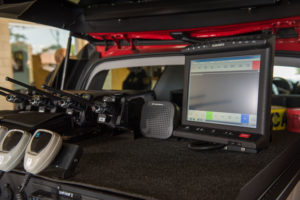 Crew members also have the incident detail and up-to-date information at their fingertips and no longer have to rely on hand-written notes scribbled onto scraps of paper as they are being dispatched; the address and other potential life-saving information is displayed on the Patriot’s screen along with a live map that routes them to the scene. With the entire map database contained within the MDC, the crew tracks their own movements and can also backtrack (breadcrumb) out of unfamiliar or low visibility areas even if network connectivity is lost.

The collaboration between CAL FIRE and RadioMobile has resulted in a new level of on-scene and whole-system situational awareness across the entire state. “The Patriot allows us to see where resources are while on a fire scene, and that is huge from an accountability standpoint,” shared Battalion Chief Matt Damon.

And that visibility using real-time GPS and AVL technology helps CAL FIRE achieve its overarching goal: to increase the safety for responders and the people they protect.

As with any implementation process—especially for a statewide agency separated into 21 departments, each with its own unique set of circumstances—CAL FIRE faced challenges along the way. “For example, our vehicles don’t use shore power like a typical city fleet,” Marksbury explains. “So, when you’re dealing with systems that are designed to use the station as a power source to retain settings like sound and screen brightness, you run into some issues.” 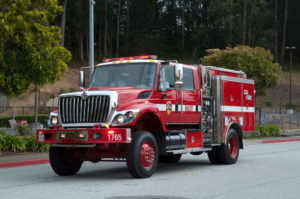 The CAL FIRE and RadioMobile implementation team worked together to address issues such as not having electrical connections when in the station and others unique to each of the agency’s units. Successful implementation of a system in an agency this size takes collaboration and creativity.

CAL FIRE is well on its way to accomplishing its key technology goals through this innovative partnership.
“The high level of commitment and customer service by RadioMobile makes me confident this is the right solution for CAL FIRE,” says Damon.

CAL FIRE’s advancements in communications and connectivity are only just beginning. CAL FIRE is working on new interoperability solutions that will allow fire personnel to communicate with other outside agencies, especially during major events like wildfires.