“Every project we have done with RadioMobile has been a total win. Their products are great, and the support is top notch.“

The old FSAS was a proprietary system compiled of relays, batteries, inverters and a commercial public address system. Dispatch alerts were received via two-tone signals through the radio system that triggered the process of turning on station lights, generating a series of alert tones, and finally turning on the speaker so the voice dispatch could be heard. While the system served its primary function, it could not be modified or customized in any way. Furthermore, since transmitting paging tones via a radio system is very time-consuming, the entire process was delayed whenever several stations needed to be alerted at once.

The Department was in desperate need of a FSAS based on
modern data communication that could:

To find a solution to their FSAS dilemma, the Department turned to their trusted technology provider, RadioMobile. RadioMobile had recently completed the successful deployment of a new mobile data Automatic Vehicle Location (AVL) system for the Department’s 1,300 emergency vehicles. RadioMobile got to work immediately. They met with operations personnel to compile their wish lists and quickly came back with a concept for a fully customizable IQ Fire Station Alerting System. “We incorporated all of the unique things they wanted the system to do for them,” says Jim Moore, CEO, RadioMobile. “And, they came back with some additional requests, so the process was very collaborative.”

The result of this collaboration was a new FSAS, based on modern technology, which improves response times and can be customized to meet the needs of each fire station individually. With the new FSAS, the Computer Aided Dispatch (CAD) system sends a dispatch that is immediately converted to a signal by IQ FSAS and routed to the appropriate station(s) via the county’s Land Mobile Radio (LMR) network. Next, RadioMobile’s Patriot Mobile Data Computer (MDC), the fire station’s control unit and command terminal, receives the alert and initiates whatever sequence of events that have been configured for that particular fire station. Alert and notification events include escalating tones, turning on lights in specific areas and the text-to-voice dispatch of the call containing incident type, responding units and other pertinent information. The radio’s voice channel is also opened for ongoing communications between crew members and dispatch. Fire apparatus equipped with RadioMobile’s MDC and mobile software simultaneously receive the alert and dispatch message, so crews have the information at hand as they leave the station. The station and apparatus MDCs display the details of the dispatch. 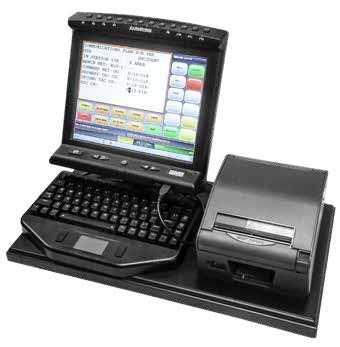 Some of the key features of IQ FSAS include fully programmable and customizable lights and tones. Now, lights and tones can correspond with each apparatus required for the call, whether it’s an engine, truck, battalion chief, specialty apparatus or medics. Alert lights and tones also correspond to particular dorm rooms, so responders are only alerted to calls they are needed on, for whatever specific apparatus is required at the incident. The tones tell emergency personnel who needs to respond immediately.

“Gone are the days of responders having to look carefully at a screen when they get the alert from dispatch,” says Moore. “The IQ Fire Station Alerting System is saving seconds, especially when seconds matter, and it’s streamlining operations.”

Preparing for the Future

Equally as important as solving their FSAS problem, the IQ Fire Station Alerting System has prepared the County of Los Angeles Fire Department for the future. The system is designed to meet the future demands of evolving technology and makes it easy for the Department’s operations personnel to build upon the existing software. Future enhancements include additional text-to-voice options, automated door operation, remote vehicle starting and even turning off the gas to the kitchen appliances. Generating a paper copy on the station’s rip-and-run printer that includes critical first directional turns out of the fire stations is also in the works, according to Moore.

The Department can now look forward to continuing its efforts to take advantage of additional new technologies in order to better protect the people they serve. “Every project we have done with RadioMobile has been a total win,” explains Scott England, LA County’s telecommunications systems consulting engineer. “Their products are great, and the support is top notch. We are excited to continue moving forward with them as we upgrade other equipment and roll out additional features.”

It is clear that IQ FSAS has improved overall response time — from the time the alert is sent and received, to the time responders dress out, are in their rigs and are on their way to the incident.

Says Moore, “The right people get up, grab the right equipment and are on their way faster than ever.”